…because my writing of it is not going to do it justice. But, I’ll try anyway. 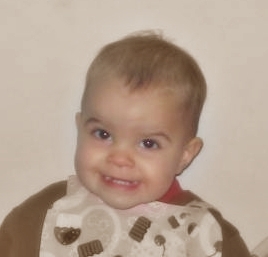 Our 18 month-old, Jubilee, has been increasing in her language abilities, to the delight of the whole family. (You know how cute those baby pronunciations can be!) She usually gets her point across, but occasionally we’re slow to figure out just what she’s trying to say. Such was the case yesterday.

I was elbow-deep in raw hamburger, egg, and milk, mixing up a meatloaf while the older kids were schooling at the table. My 7 year-old daughter had already finished her math, so I had put her in charge of watching Jubilee briefly while I finished up the meal preparations.

Suddenly, Jubilee dashed into the kitchen. She yelled, “Now-Now!” and then opened her mouth wide, stuck out her tongue, and made a wretching noise.

Hmmm. Unusual. Just to be sure, I asked, “What’s in your mouth?” Always when I do this, she’ll spit if she has indeed put something in there. Instead, she shook her head and ran back out of the room.

A mystery. So, I began scraping hamburger off my hands and into the bowl. As I turned to the sink to wash off the raw meat, Jubilee returned.

“Now-Now!” Tongue stuck out, she gagged once again. Never before had I been so confused about a translation. Curious, I said, “Show Mommy!”

Dutifully, Jubliee ran off toward my bedroom. Halfway there, she turned to me again and repeated emphatically, “Now-Now!”, stuck her tongue out dramatically, and gagged.

Finally, we made it into the master bedroom. Jubilee looked to the bed, saying, “Now-Now!”

Then she ran around the corner of the bed, where her older sister sat on the floor next to…

Oh! I see…the cat has thrown up on my bedroom floor! Thanks for letting me know, Jubilee. I’ll get to cleaning that up right away…

3 thoughts on “If Only I Had Caught this on Video….”