This morning, I was busy canning French beans (regular ‘ol green beans, which they don’t really like here but which we weird wazungu not only eat, but put in jars to save for later). One of my near neighbors, who now helps me with wash, was watching the process intently and ended up just shaking her head and laughing, saying, “You are funny!”

The big boys had gone to the market for me, and most of the other children were busy helping Marc sort our dry bean harvest in the front yard. That left Hannah and Jubilee in the living room, happily playing–but I wanted to give them something productive to do that would capture their attention for a while. I remembered when Rebekah was young, introducing her to sewing with lacing cards like this (photo courtesy of Amazon.com): 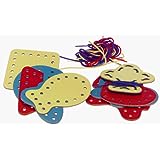 On occasion, I had also made my own sewing cards by cutting various shapes out of colored paper and laminating them, punching holes with a hole puncher, attaching yarn, and threading it on a plastic needle.

With a burst of creative energy that I admit I’ve rarely experienced since we moved to Kenya, I decided to make the girls some lacing cards. Colored paper is hard to come by here, never mind contact paper, and I wanted something durable. Fortunately, someone had recently thrown a small box in the garbage can, so I retrieved it and cut a couple of pieces of cardboard from it. Hannah fetched our hole puncher and I found some yarn that one of the boys had left on the kitchen shelf (as we so often forget that there’s “a place for everything, and everything in its place”). Having no nifty plastic needles, I decided to improvise by putting some duct tape around the end of the yarn. I made a heart and a flower, and the girls colored and sewed them while I worked on the beans. Here’s Jubilee’s heart: So passed a busy but relatively quiet morning. When Rebekah was done with her morning’s work, I asked her if she wanted to make some sewing cards for our neighborhood little girls. She said, “Oh, they do sewing like this already. They use small sticks for needles, long grass or straw for thread, and leaves to sew together.” And I thought I was creative! The simplicity of life here and how much these folks can do with so little never ceases to amaze and challenge me.

And totally unrelated to the morning’s activity, while I was looking for the yarn which I remember having last seen on the kitchen shelf, I also tried to count our mound of eggs:

Each layer holds 30 eggs, so we have sixty, plus the additional eggs mounded on top…maybe 80? I am thankful, as for a long time after our arrival here, getting eggs was hard. We could usually only muster 3-4 eggs every few days, which was enough for miscellaneous baking, but never enough to have, say, scrambled eggs for breakfast. We got our own chickens not too long ago, but they’re certainly not American Leghorns that lay an egg every day. Out of our 7 (?) hens, we only get 1-3 eggs per day, and after they lay 5 or 6 eggs they want to go broody, so they’ll stop laying for quite a while, even if they’re not sitting on a nest. A good breakfast of eggs for us is a couple dozen at least, so left to our own devices that rarely (if ever) happens.

But lo and behold, it seems that word has spread far and wide in our small village that the wazungu like eggs. Almost every day (usually in the evening, as the Mamas are starting to prepare supper) we have someone come to the door with one precious egg, or maybe two…sometimes a half-dozen. Most always, they come with their bag of dry maize in hand as well. And as we give them their twelve shillings per egg, we watch them run next door to the mill, where they use 5 or 10 of those shillings to grind the maize to make their evening ugali. One older man comes frequently with larger numbers of eggs, though no one is quite sure where he manages to find them. Unfortunately,we’ve noticed that he doesn’t spend his egg earnings so wisely. Sometimes Marc shakes his head over spending so much money on eggs (a dozen eggs here is about the same price as its American equivalent, which tells you that they’re comparatively expensive), but we use them and are thankful for the protein, since we only eat meat once or twice a week. And we’re glad to be a small cog in the wheel of our local economy.

1 thought on “On Creativity and Supporting the Local Economy”